To varying degrees, common organic materials such as water, sugars, and proteins absorb wavelengths in the SWIR band, between 1000 nm and 1750 nm. This places Ushio’s SWIR LEDs as a crucial component of modern optical food sorting systems.

Materials with high moisture content, such as fruit and vegetables, return a “darker” image because more of the SWIR rays are absorbed; by contrast, materials or substances that reflect the light appear “brighter” when captured by an SWIR camera. This type of spectroscopy can be used to monitor the nutritional value of food, which is a critical element of agricultural and processed food production.

The most common food ingredient, water, is measured for a variety of purposes, for example, ensuring the water content of baked cookies remains consistent in every batch. SWIR technology outperforms the visual capability of the human eye in tasks such as the detection of bruising under the skin of an apple.

Under-skin bruising can be identified by the water content irregularities caused in the affected area, even if the apple appears to be unblemished to the naked eye. This same moisture detection ability can accurately chart the ripeness of various produce to allow them to be sent out for distribution at precisely the right time. 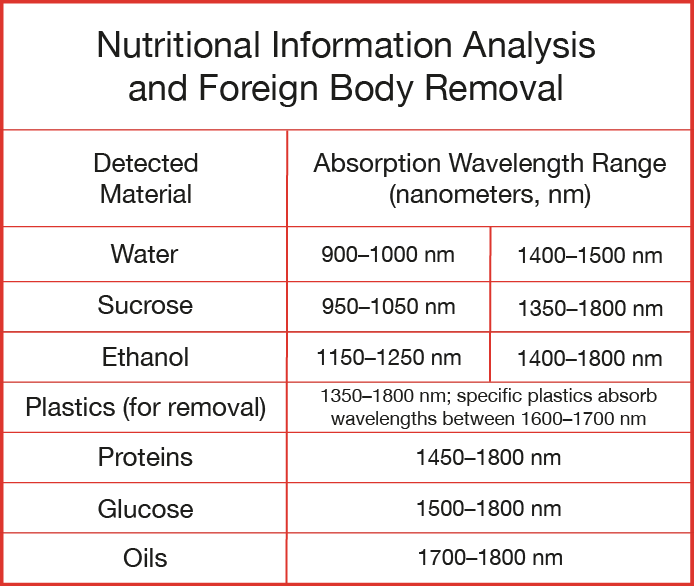 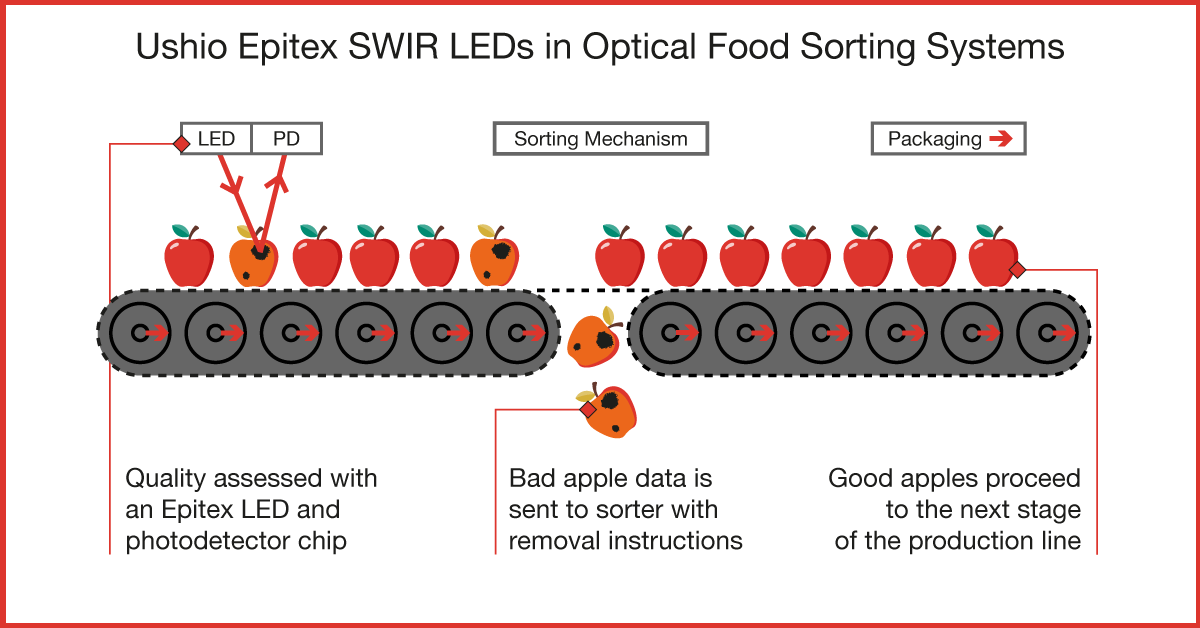 Once the material’s light absorbency has been defined and fed into the sorting software, the system can be instructed to either accept or reject anything passing its field of view that corresponds to the defined absorbency. This can also be used in product quality control to eradicate foreign matter or identify items which are of the correct material, but suffered damage prior to the sorting process – much like the bruised apple.

How can LED food analysis broaden your customer base?

Sugar content not only plays a part in the taste, but also heavily influences the market value of many foods too. Using SWIR to analyze the sugar content of apples allows producers to identify those that possess the perfect level of sweetness.

This opens a variety of markets to a producer – an apple intended as a mid-morning snack may be different from the flavor desired by the brewers of a dry cider. Gaining the ability to separate these two ‘perfect’ apples into consistent batches could be the difference between earning a short-term customer and one who will remain loyal for years to come.

The problem is, even if you are selling bottles of purified water, the likelihood is that your subject material contains many different molecules within its structure. Fitting all of these different
wavelength emitters and sensors into a compact device can be a complicated and expensive headache.

Luckily, Ushio has mastered the art of placing up to three different chips in one package, measuring only a few square millimeters. The chips can be an assortment of LEDs and sensors, so each package effectively reduces its occupied space on a circuit board by two-thirds. It is even possible to analyze various material components in great detail by cycling through different illumination wavelengths. By independently pulsing light-emitting chips, in conjunction with a high-speed camera, it is possible to obtain spectroscopic images that tell the whole story.

How are Ushio’s LEDs used in optical sorting applications?

Optical sorting is a system that detects the quality and/or presence of foreign substances based on spectroscopic information. Most importantly, manufacturers of optical sorting systems are interested in the properties of light absorption, transmittance, and reflectivity.

In order to obtain spectroscopic information, illumination using a combination of LEDs with multiple wavelengths, from ultraviolet (UV) to visible and infrared (IR) is used. In particular, SWIR is used for the quality inspection of foodstuffs because this band of wavelengths is mostly absorbed by organic materials.

Typically, for the measurement of transported objects, a large number of LEDs are arranged in a line perpendicular to the conveyor belt, or other transportation mechanism. The LEDs, each emitting a different wavelength, illuminate the object sequentially. The object is captured as a series of images, each contributing spectroscopic analysis. The image capture is achieved using a line image sensor, specifically an InGaAs line sensor when SWIR measurement is required, which is typically also installed perpendicular to the transport direction.

Based on predetermined quality attributes, the transported objects are assessed and selected for retention or rejection by the mechanical sorter, should they fail to meet the required standards. 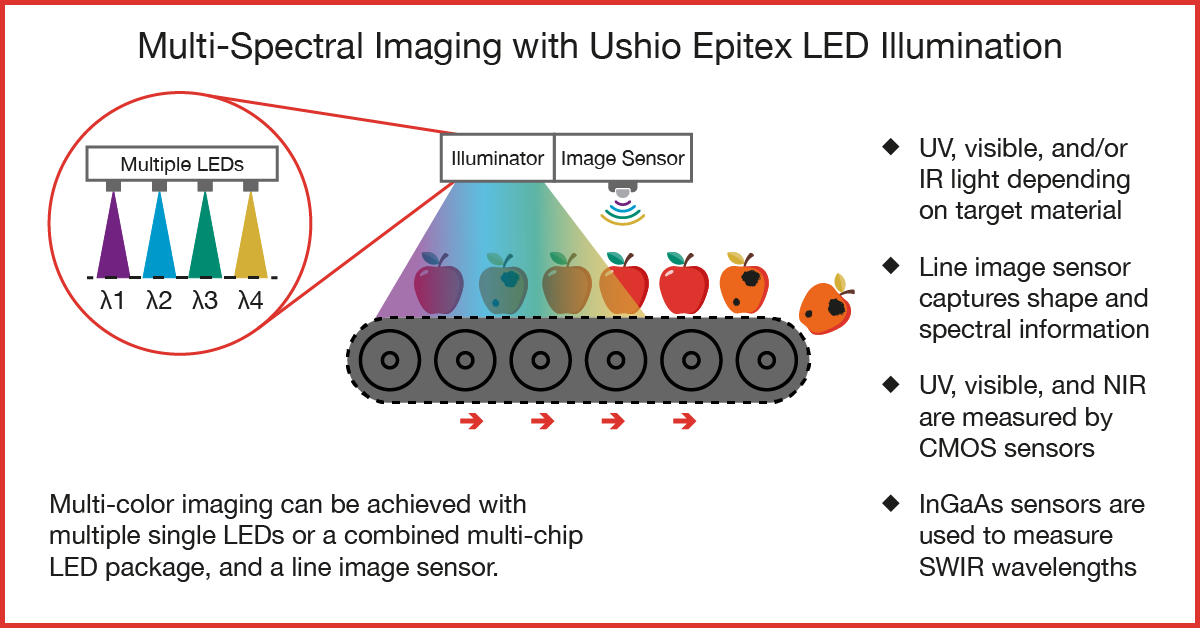 Build Your Own SWIR LED!

With so many configurations and variations available, we decided to put the choice in your hands. Select your preferred wavelength, package type, viewing angle & output power, and let our SWIR LED Builder do the rest!

Need some help? Simply get in touch and one of our experts will guide you to the right solution!

If you would like to make an inquiry regarding the role Ushio’s SWIR LEDs in food sorting applications, contact Ushio’s regional experts via the following link: