LED Solar Simulation: Accurately replicating the power of the sun with Ushio Epitex 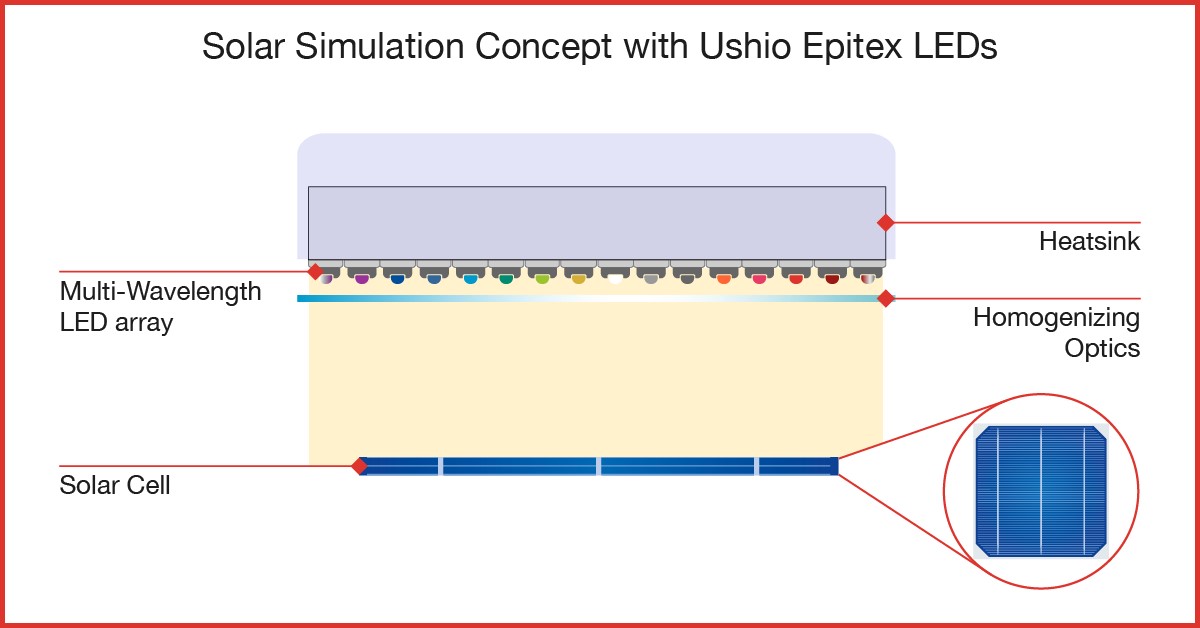 This article explores the science behind solar simulation and the recent shift in technology that has seen halogen and xenon solutions make way for breakthroughs in solid state lighting (SSL) technology. Are you ready to speak to someone about integrating Ushio Epitex LEDs into your complete solar simulation solution? Visit our contact page to begin your inquiry today!

What is a solar simulator?

A solar, or sun simulator, is an artificial system designed to accurately replicate the spectral distribution and illuminance of natural sunlight. There are different types of solar simulator, each with technical specifications designed to fit particular applications. The various types are often separated by the type of exposure in use—flashed, continuous, and pulsed. As new scientific advances were made, Ushio’s attention shifted from the standard halogen and xenon lamps. We have entered a new age of LED solar simulation technology, with solid state lighting (SSL) taking centre stage. Ushio’s Epitex LEDs offer a flexible pulse drive and spectrum, as well as a lifetime that far exceeds its predecessors.

How does the IEC define ‘natural sunlight’?

The spectrum of sunlight is defined as the Air Mass 1.5 Global (AM 1.5G) Spectrum. Under AM 1.5G, one Sun equals an irradiance of 100 mW/cm2. The International Electrotechnical Commission (IEC) described the properties of the natural sunlight that penetrates our atmosphere in IEC 60904-9; therefore, any industry-standard solar simulator must be able to operate in accordance with those guidelines. 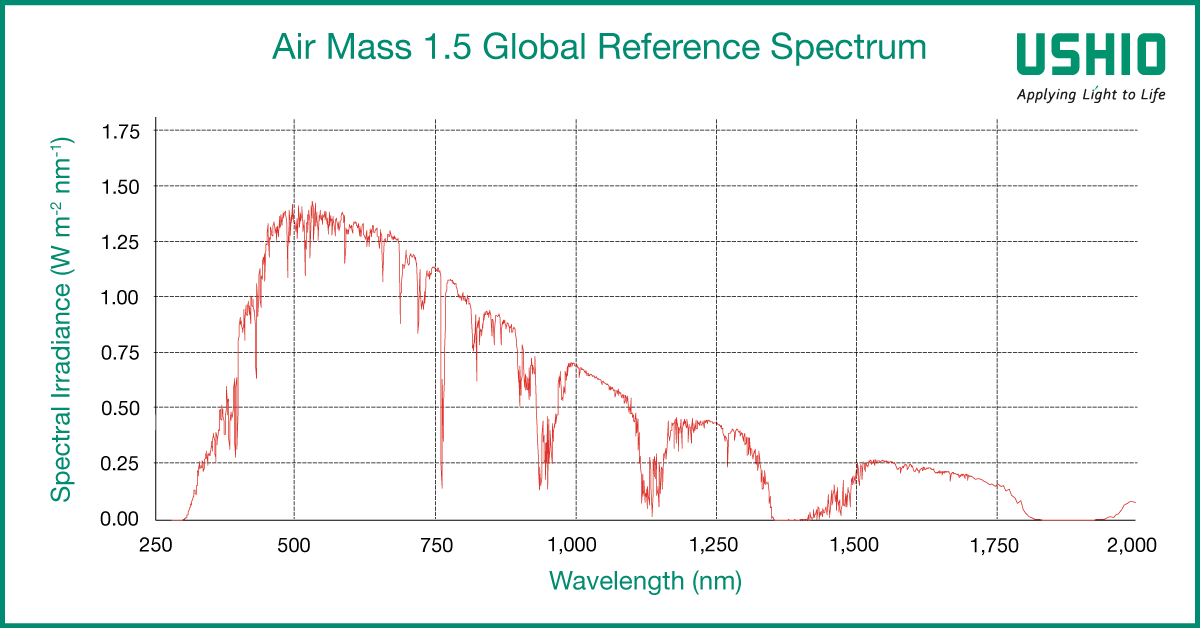 Under IEC 60904-9, the overall performance of a solar simulator is measured and rated by three metrics:

The IEC standard scores each of the three metrics on an “ABC” scale, with “A” representing the closest possible match to the respective properties of natural sunlight. A perfect triple-A score is attainable with LED-based solar simulators, but to do so, some strict targets must be met.

To illustrate the strict targets demanded of solar simulation systems, we introduce a common application as an example for you. As one of the most abundant elements on planet Earth, silicon (Si) is the most common material used for the production of solar cells. Solar simulators can imitate various environmental conditions to work out how efficient Si solar cells are. It is important to remember that solar cells will generate far less electricity on a cloudy winter’s day. Silicon has a forbidden band gap of 1.12 electron Volts (eV), which means the photons hitting the solar cell must have energy in excess of 1.12 eV to generate an electronic charge. An LED solar simulation system driven by Ushio Epitex helps to work out how efficient the equipment will be in every possible environmental scenario.

A sun simulator must also closely match the AM 1.5G spectrum between 300 and 1,200 nm. For the highest class of sun simulators, the spectrum variance should not exceed ±12.5% in each wavelength range. The irradiation of any substrate, such as a typical 200 mm2 solar cell, must remain within ±2% uniformity over the surface too. 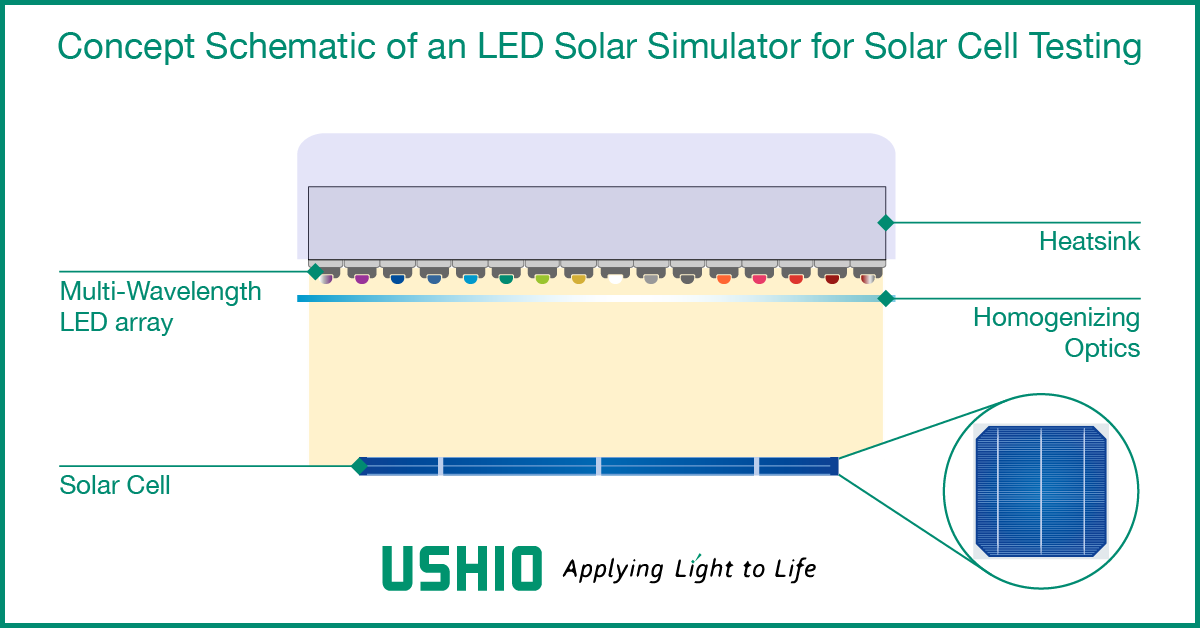 Discharge lamps vs LEDs: Where is solar simulation technology going?

When working with previous Ushio clients such as ESA, NASA, and JAXA, pulsed xenon (Xe) short arc and metal halide (MH) discharge lamps dominated solar simulation; however, these technologies are susceptible to a few disadvantages:

In the new SSL generation, an array of LEDs can adequately cater for the AM 1.5G standards while avoiding those issues. The main advantages of LEDs as a solar simulation light source are:

Which LEDs are best for solar simulation applications?

The Epitex series offers single- and multi-chip LEDs covering wavelengths from 365 nanometers (nm) to 1,750 nm; crossing through the ultraviolet (UV) and visible light ranges, up to the short-wavelength infrared (SWIR) region (1,050 nm ­- 1,750 nm). While there are many different types of LED package, the SMBB and EDC series’ are the most suited to solar simulation applications. 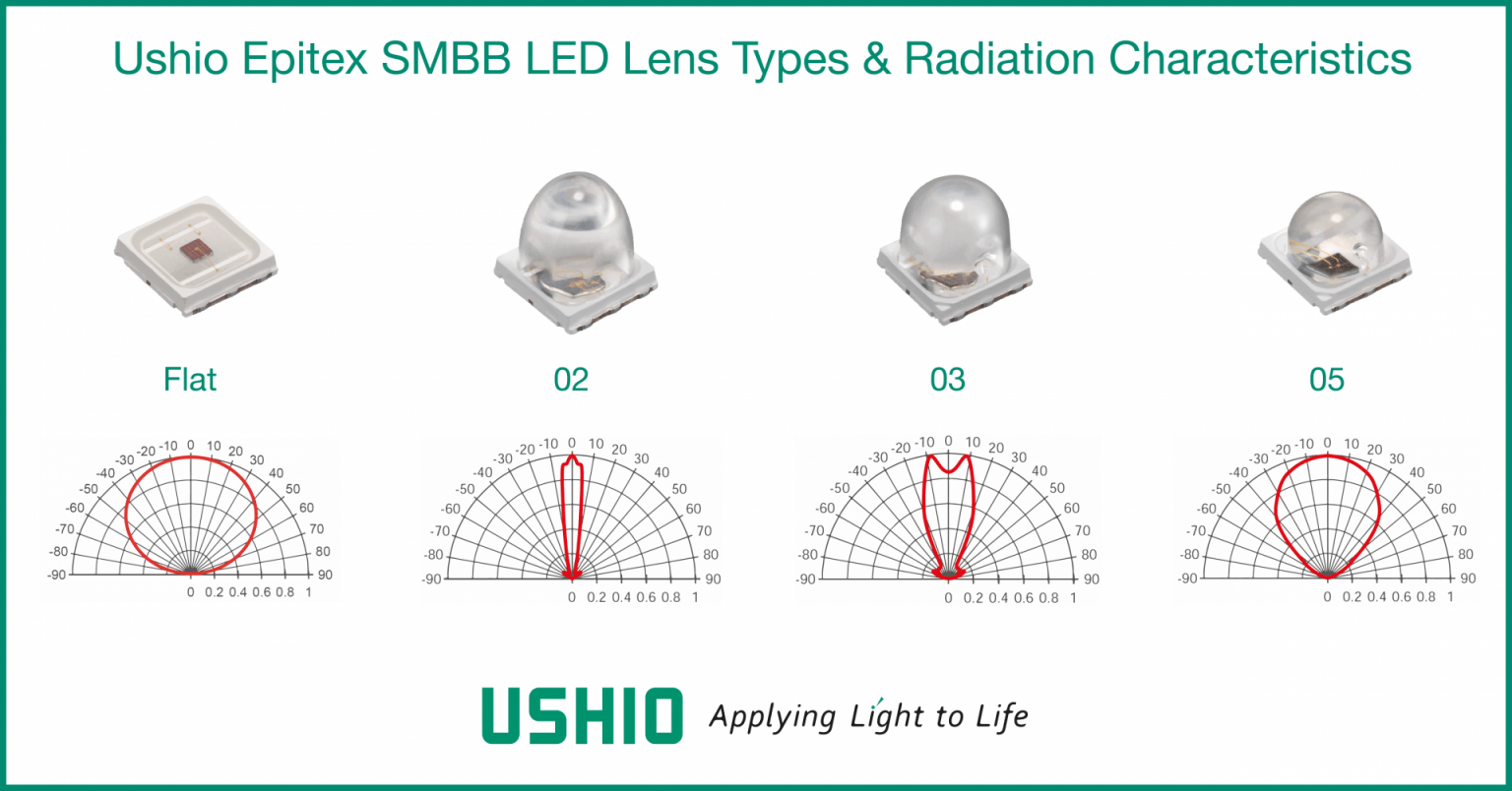 The SMBB family is perhaps the most versatile set of LEDs on the market. Equipped with a copper heat sink, these record-breaking 5 mm2 LED packages are available in single or multi-chip form. 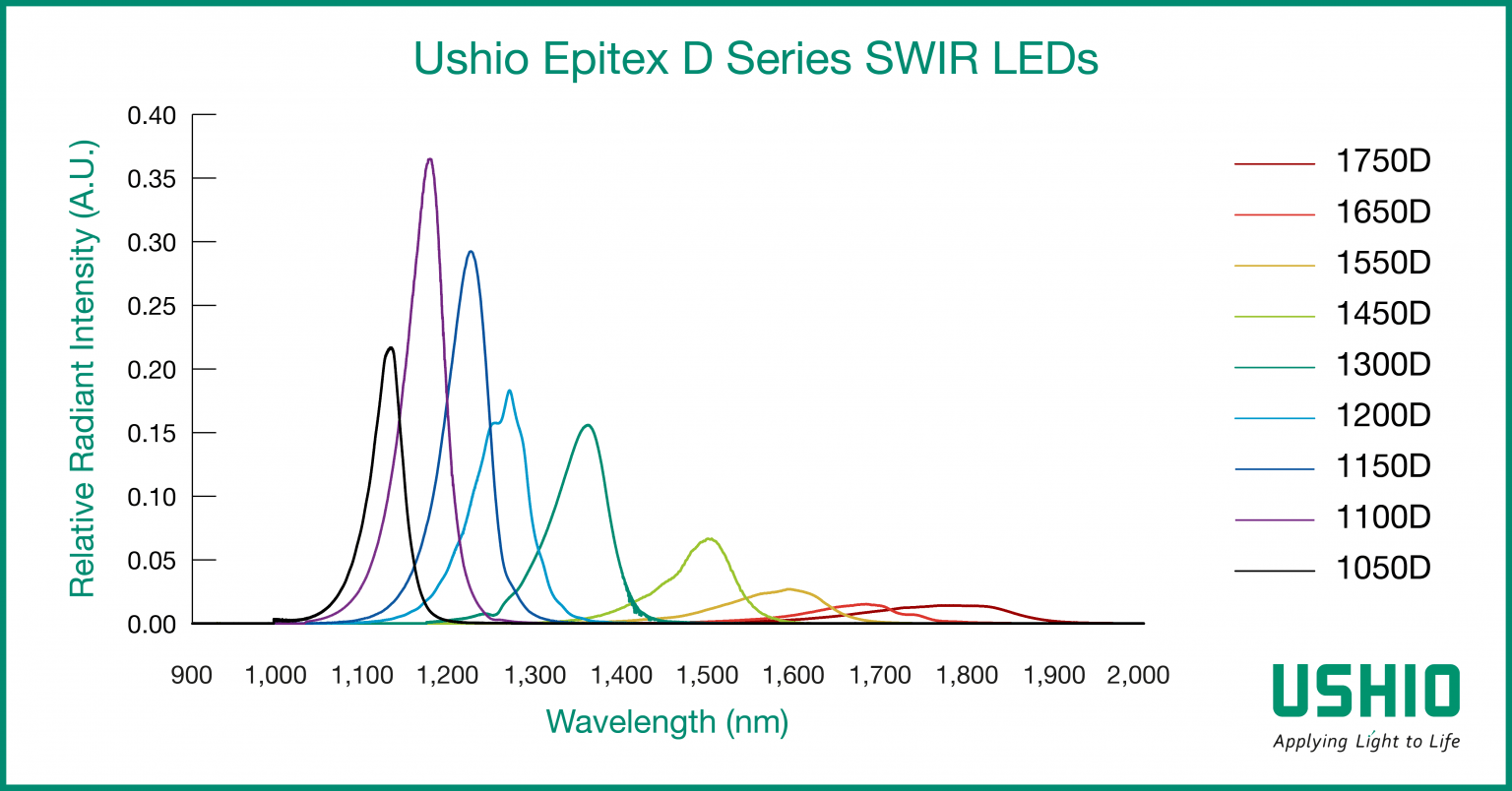 Incidentally, Ushio manufactures the most powerful and efficient SWIR LEDs ever produced, the Epitex D Series, which covers the long wavelength side of the solar spectral match specification. Ushio delivers the perfect solution to your LED solar simulation needs with excellent customization options, including your choice of variations on wavelength, chip size, lens type, and more.

The D Series utilizes different semiconductor materials in order to find the perfect chip material for each wavelength. Indium gallium arsenide phosphide (InGaAsP) is the semiconductor material used to emit SWIR wavelengths from 1,000 nm to 1,750 nm region. This range is particularly useful for the solar simulation testing and inspection of compound solar cells.

EDC packages feature a ceramic base which serves as an excellent heatsink and provides exceptional isolation from the circuit. The 3.5 mm2 EDC packages are mounted with a single 1 mm2 chip and are capable of the fulfilling same applications as single-chip SMBBs. A smaller footprint frees space for more LEDs or other components. 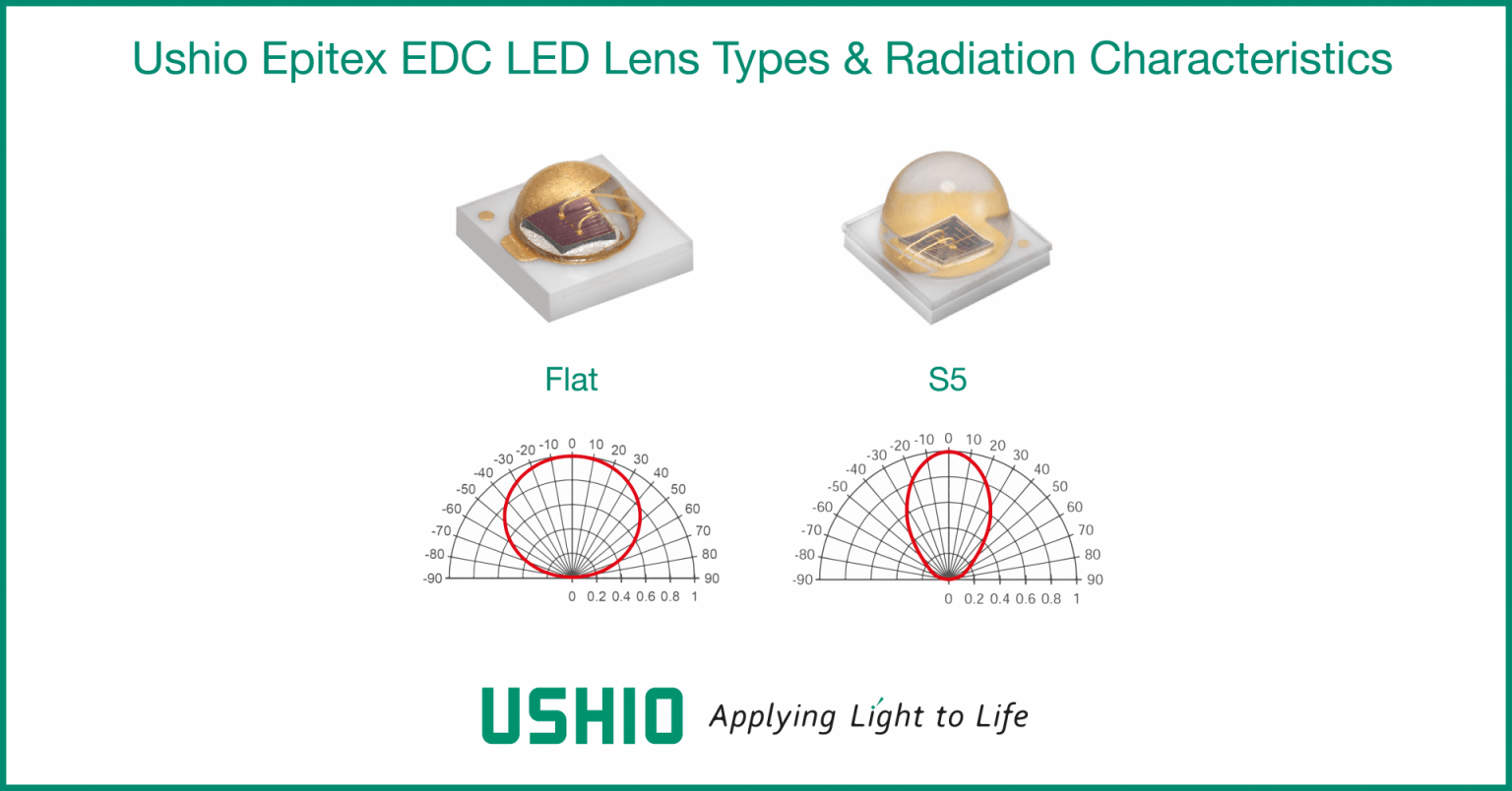 Conclusion: why are Ushio’s Epitex LEDs the future of solar simulation?

Contact Ushio for advice on all solid state lighting applications

If you would like to make an inquiry about Ushio’s Epitex LEDs for solar simulation, click below to reach Ushio’s regional experts: