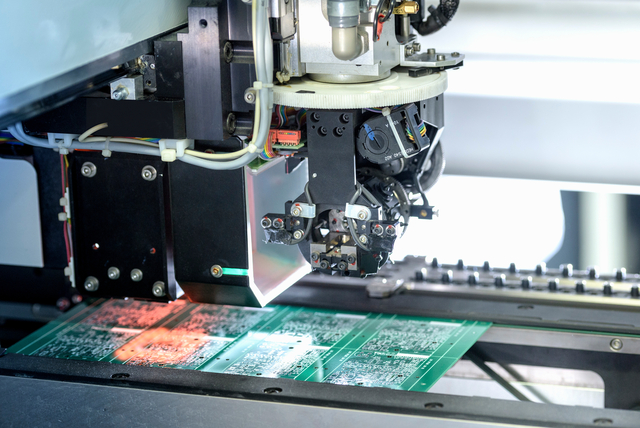 Ushio’s Epitex division has grown to develop the largest collection of light emitting diodes on the market. Covering all violet, visible, and infrared (IR) wavelengths, from 365 nanometres (nm) to 1,750 nm, this vast catalogue creates a one-stop-shop for single and multi-wavelength LEDs. Known for its dedication to customisation options and first-rate product quality, Ushio offers an unparalleled product choice and the ability to provide a unique solution for every application. Whether you require a single high-power chip, or up to three chips each emitting a different wavelength, Ushio can find the right recipe to realise your ultimate goals.

The standard multi-chip Epitex LED products fall into the SMT and mould type package families. Able to simultaneously emit two or three wavelengths of light, these LEDs are perfectly suited to low-power applications such as vital sign sensors and other medical instruments. Mould type LEDs are known as the archetypal standard for narrow angle light emission; however, this style of LED possesses quite a large package height. When space is a little tighter, SMT LEDs are the preferred standard, thanks to their shorter package taking up less room.

When applications call for a higher multi-colour output power, such as automatic number plate recognition (ANPR), Ushio designs and manufactures customised multi-chip SMBB packages and EDC LEDs where a smaller footprint is required. Additionally, photodiodes can be integrated into the customised packages to allow sensory measurement and analysis alongside the light emitting capabilities. Other customisable options include package shape, type, and number of light emitting chips. 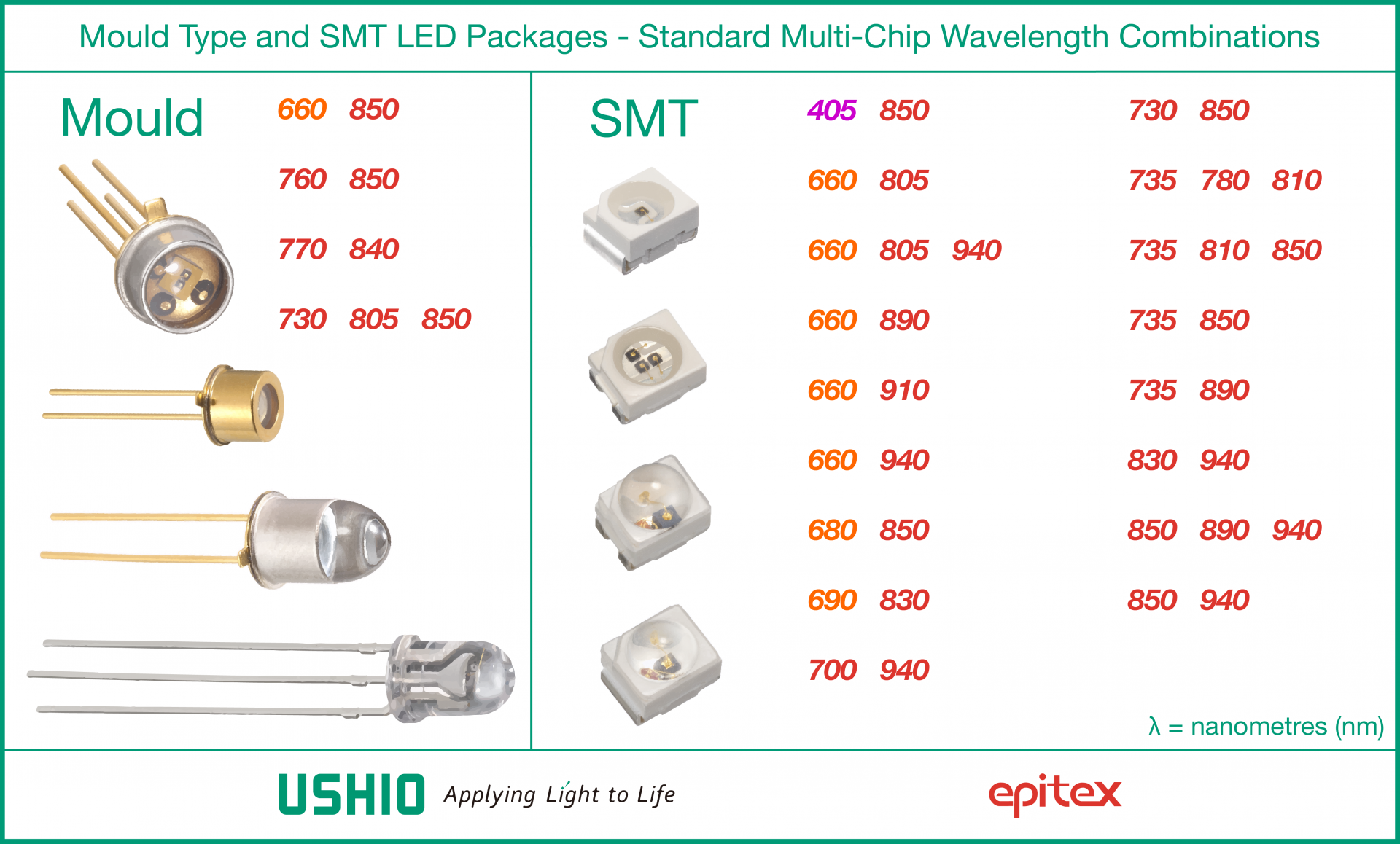 Why choose an Ushio Epitex multi-chip LED product for your application?

For blood oxygen saturation measurement, oximetry commonly monitors the light absorption of arterial blood when exposed to certain wavelengths, typically 660 nm visible-red light and 940 nm IR light. The iron-rich protein responsible for distributing oxygen throughout the human body as red blood cells, haemoglobin, presents significantly different properties when in a fully-oxidised state (oxyhaemoglobin – HbO2) or when oxygen levels are drastically reduced (deoxyhaemoglobin – Hb). These changes in state directly affect the amount of light absorbed by the blood, therefore allowing professionals to determine whether or not the level of oxidation is a cause for concern. To be specific, oxyhaemoglobin absorbs more of the IR wavelength, while reflecting more of the visible-red light than the deoxygenated haemoglobin, and vice versa.

Typically, the 660 nm and 940 nm emitters are packaged with a single photodiode and are activated alternately. To obtain a clear picture of the differences in absorption, developers can design a flexible lighting pattern where each emitter is active for a different length of time. This means the end-user will receive an LED package that is perfectly tuned to their needs. In the case of heart rate monitors, green wavelengths of approximately 525 nm are preferred as haemoglobin has its highest rate of light absorption at this wavelength. Furthermore, multi-chip LED packages allow wearable sensory equipment to be substantially reduced in size, thanks to fewer LED packages, a smaller footprint, and the flexible lighting pattern described above.

Specimen testing, such as routine property examination of blood and urine, plays a vital role in sample content analysis and a key part of this is a process called fluorescence spectroscopy. This type of analysis allows medical professionals to analyse the amounts of different compounds within the sample. The basic premise of fluorescence spectroscopy is the application of electromagnetic radiation to a solution in order to excite the electrons within certain present compounds. This transfer of energy then causes the electrons themselves to emit light. While this emerging technique is non-invasive in nature, it has been building a good reputation for the rapid diagnosis of certain cancers.

Traditionally, fluorescence measurement was an area controlled by metal halide or mercury lamps, xenon lamps, and lasers; however, the dominance of these light sources, particularly in the field of fluorescence microscopy, must now contend with the tiny footprint of high-power, multi-chip LEDs too. LED light sources have very long lifetimes and a miniscule footprint, especially when compared to mercury or xenon lamps, but their main advantages lie in the minimal heat production, almost monochromatic wavelength emission, and zero ozone production. These factors are especially appreciated by the original equipment manufacturers (OEMs) of medical devices.

Multiple reagents, which are compounds used in the test analysis, are used to extract a large amount of information from the specimen. Each reagent interacts with a different wavelength of light; therefore an LED with multiple fluorescence excitation wavelengths will be required. The most commonly requested excitation wavelengths are 405 nm, 525 nm, and 640 nm.

In 2020, a particular application for this type of LED in medical science that has become very well-publicised is the polymerase chain reaction (PCR) test. Although there are several methods of detecting the novel coronavirus, SARS-CoV-2, the PCR test is the most universally used and is regarded as the most reliable. The method involves taking a small part of the coronavirus and repeatedly replicating it, in the hope of being able to detect the same genetic material in a given sample. PCR tests are extremely sensitive, so the virus can be detected in the sample even if the individual is not carrying a large amount of it yet. This does not mean that a virus can be immediately detected, as there must be enough of the virus present in the nose and throat at the time of the test. The PCR test is believed to be effective from around one to two days before symptoms of COVID-19 begin to manifest.

Another application especially suited to Ushio’s Epitex LEDs is the measurement of water and sugar content in processed foods, fruits, and vegetables. The use of short-wavelength infrared (SWIR) LEDs in combination with an SWIR camera system has grown in recent years. As with blood oxygen saturation measurement, wavelengths with and without absorption of the target compound are brought together in a single LED package. Water has a high absorption rate in the wavelength region around 1,450 nm, while sugar absorbs more light in the 1,500 nm to 1,650 nm range. Multi-chip LEDs provide the most accurate illumination for precise measurements in this field.

Every material, whether organic or man-made, has a different molecular and chemical composition. Different structures reflect or absorb SWIR rays to varying degrees and this enables us to teach machines to identify items in a sorting process. Many organic materials absorb most of the rays in the 1,000 nm to 1,750 nm wavelength range. If more rays are absorbed, as in the case of materials with high moisture content like fruit and vegetables, a darker image will appear when captured by an SWIR imaging device; by contrast, materials or substances which reflect more rays will appear brighter. This type of spectroscopy can be used to detect and measure water content to separate fruit from foreign objects on a production line, or to differentiate between the various polymers present in a plastic recycling facility.

Once the expected 1,050 nm absorbency has been measured and fed into the machine sorting software, the machine can be instructed to either accept or reject anything which passes its view with the corresponding level of light absorbency. This can also be used in product quality control to identify items which are of the correct material, but have suffered damage prior to the sorting process. A common example of this process is in-line fruit sorting. An apple may have a bruise under the skin which is not visible to the human eye, but SWIR vision can reveal this defect to the sensing device and trigger the removal of the apple from the production line without requiring a person to track it down manually. This moisture detection ability even allows the ripeness of various produce to be measured and taken into account when travelling down a conveyor belt. Ushio’s record-breaking SMBB1050GD 700 mW LED excels in this particular application.

While the 1,050 nm wavelength is ideal for moisture-based food sorting, Ushio offers a wide range of LEDs for SWIR applications, with all wavelengths covered from 1,000 nm to 1,750 nm. For applications outside of the infrared region, the Epitex LED collection also spans visible and violet light, right down to a wavelength of 365 nm. Full specifications of each diode can be found in our online LED library.

8 chips in 1 package: the result of a constant drive for SSL engineering innovation

In Kyoto, Japan, the solid state lighting (SSL) engineers at Ushio are simply not content to sit back and gaze at their achievements. Behind the accomplishments of Ushio’s SSL division is a team of dedicated professionals who are always striving to improve on past successes. An example of this is a new type of customisable LED package, currently under development, which can incorporate up to eight different chips into a single package. 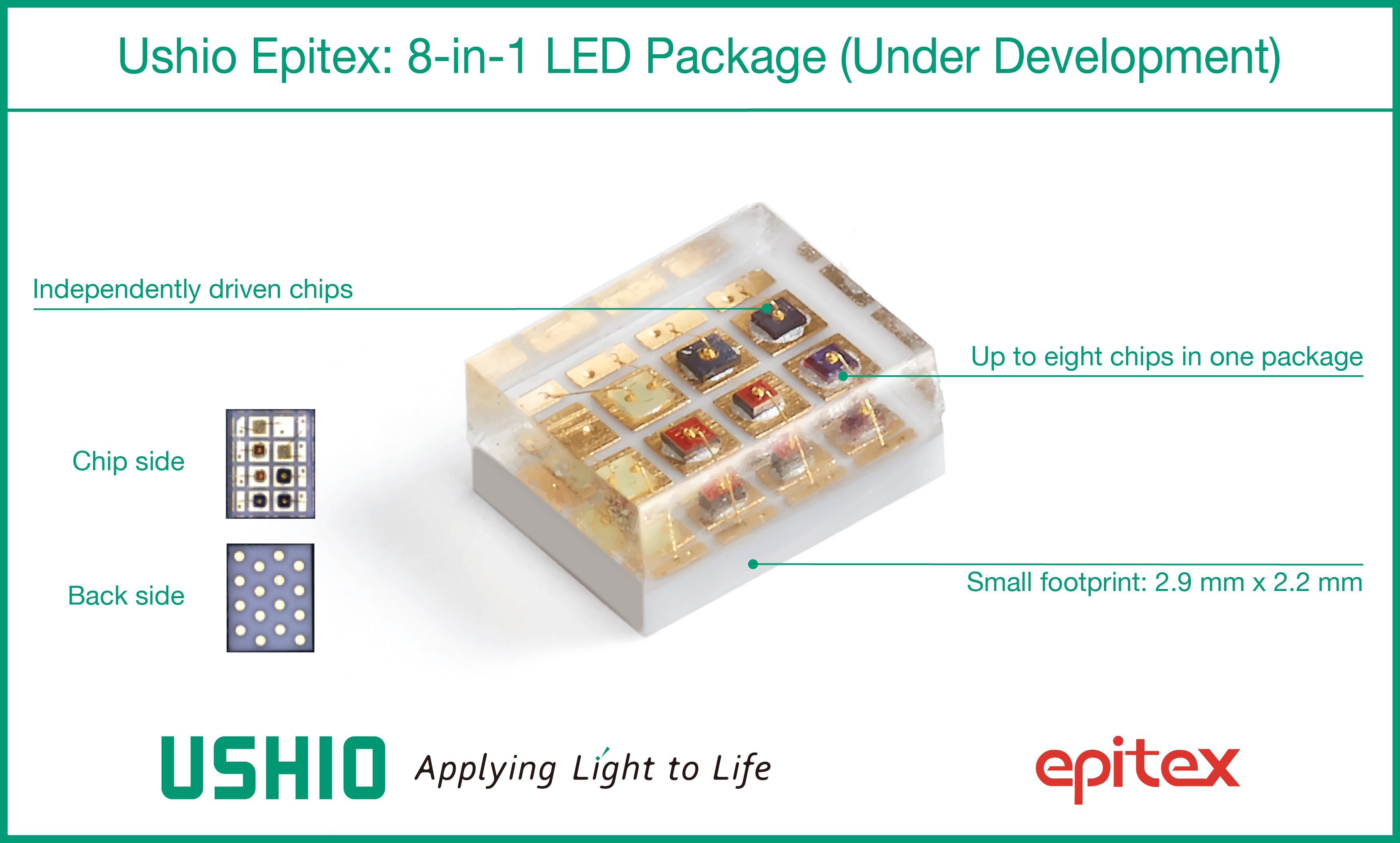 This staggering achievement could revolutionise sensory and analysis device design, with the possibility to have up to eight different wavelengths of photo-emitter and photo-detection chips in one tiny footprint. The 2.9 mm by 2.2 mm package will contain independently driven chips and is expected to be integrated into vital sensors and spectral sensors, as well as taking part in colour sorting and quality inspection applications.

Uniting the best of the best: the growing history of Ushio’s SSL division

As its strength in the SSL sector continues to grow, Ushio’s collection of LEDs and laser diodes is quickly establishing itself as one of the biggest and most versatile on the market. The year 2020 marks an especially important milestone, as over forty years of optical semiconductor innovation finally comes together under one roof. Ushio’s tireless innovation and eye for talent has led to the acquisition of various solid state technology businesses and their subsequent integration with its existing engineering divisions.

Including the former opto-electronic device business of household names such as Hitachi, Ushio has now reached the final stage of its crowning glory. The final step sees Ushio Opto Semiconductors, Inc. merge into Ushio, Inc., joining the previously unified Ushio Epitex, Inc. and Ushio’s existing LED engineering department. This has given rise to one of the most technologically advanced divisions in the industry, where the abundant experience of its united compartments can be shared freely. As the optical semiconductor industry continues to evolve, this new structure allows Ushio to respond quickly and accurately to the various needs of its clientele; as well as accelerating the expansion of its solid state lighting business.

Contact Ushio for to make your SWIR LED inquiry today

If you would like to begin an inquiry regarding Ushio Epitex multi-wavelength SWIR LEDs for any of the applications mentioned in this article, please click the button below: